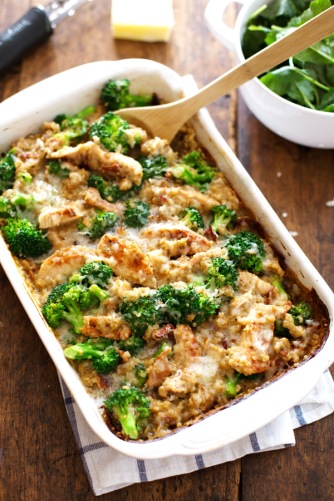 FOUND ON: pinchofyum.com  PHOTO FROM: PINCH OF YUM

RIDICULOUS MISHAPS:  Well.  None really. I advise making the bacon ahead of time or you have to wait for it to cool to crumble it.  I did not and found myself working with some pretty hot turkey bacon.

MY RATING: 3 Thumbs Up

RATING COMMENTS:  Here is the thing.  Every did eat it.  I can not say they were deligthed about it though.  My oldest, who definatley is the easiest to feed, loved it.  She had it for a snack the next day.  The other two picked around and ate some of eat.  My husband and I both ate it, but found it to be quite bland.  I did use the Guyrere cheese, it was good but did not call for enough in my opinion.

RECIPE COMMENTS/CHANGES:  This where I have to come clean about any ways I altred the recipe, right?  First of all, I used turkey bacon.  We try to avoid the “real stuff” around here.  We all like the turkey stuff so why not?, Since  you could make the recipe without bacon, this can not be the reason why it was boring (right?).  I used a chicken seasoning as the recipe called for, but not Emeril’s. Maybe that is the key?  I used MORE than called for but the flavor was just so-so.  I did use wheat flour, but it did not seem to change anything.  I also did not add a whole cup of brocolli water.  My quinoa was done at the 35 minute mark so  I just added the brocolli with a slotted spoon and let some water drip off of it.  If I had added all that water it would have taken forever to get back to the right consistency and I suspect the quinoa would have been total mush.

IF I make this again, I will use some more seasoning of some sort.  Maybe even season the chicken directly before adding it.  If you like quiona and brocolli, this could be a good one, but it will take some messing with the flavoring.  IT ALSO NEEDS MORE YUMMY CHEESE ON TOP!  If you are not interested in that type or cheese (or prefer not to spend extra on it), swiss cheese or pretty much any other would work just fine.

Are you looking for a specific recipe? Search them here!

This blog does not share personal information with third parties nor do we store any information about your visit to this blog other than to analyze and optimize your content and reading experience through the use of cookies. You can turn off the use of cookies at anytime by changing your specific browser settings. We are not responsible for republished content from this blog on other blogs or websites without our permission. This privacy policy is subject to change without notice and was last updated on February 3, 2015.
Loading Comments...
%d bloggers like this: